I arrived before time!

Following implantation, maternal and embryonic tissues combine and begin to form the placenta. Nutrients, oxygen, vitamins, and water in the mother’s blood stream pass through the placenta and umbilical cord to the embryo (then foetus); while carbon dioxide and other waste flows back to the mother. The placenta also produces hormones and maintains foetal temperature above the mother’s temperature. The best intensive care units found in modern hospitals hardly rival the placenta’s life-support capabilities. Nature at its finest! 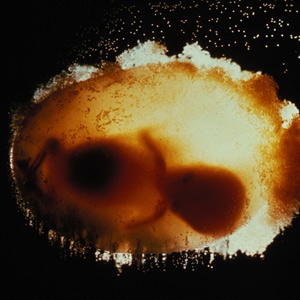 Time spent in the womb is critical for the baby’s development. If a mother is going to deliver a premature baby, doctors will try to delay labour even 24 or 48 hours to give the baby more critical time to develop. Around the 24th week of life, babies can live outside the womb in a Neonatal Intensive Care Unit, but their chances of survival and good health increase dramatically for every week, or even day, that the baby can be held.

The age of viability is getting younger and younger with advances in medical technology. Babies as young as 21 weeks (that's just over half way through pregnancy!) have survived. 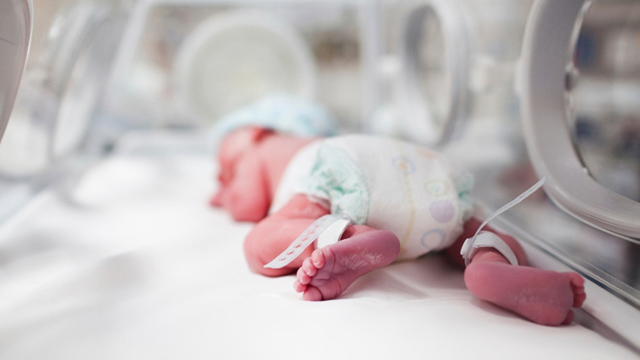 Mothers can control some of the risk factors for premature births, and can at least work with medical staff to minimize risks if a risk factor is beyond her control.  Poor nutrition, weight problems (too thin or too stout), drinking, smoking or using drugs, and stress are known risk factors that the mother can control. Carrying a multiple pregnancy, conceiving through in vitro fertilization, or not allowing the body to rest six months since the last delivery can also increase the risk of premature birth. Others, such as chronic conditions, reproductive infections, repeat miscarriages and problems with the reproductive system can increase the risk of premature birth, and must be carefully monitored.

Nonetheless, the sobering fact is that many mothers who deliver prematurely have no known risk factors.  Mothers must take very good care of themselves during pregnancy.

A preterm baby’s gestational age (in weeks since the mother’s last period) is probably the most important predictor of survival, followed by the baby’s weight at birth. According to the University of Maryland Medical Center, less than 25 percent of babies born at 23 weeks survive, about 50 percent of babies born at 24 weeks survive, and nearly 92 percent of those born at 29 weeks will survive.[1] But, all these babies are considered extremely pre-term.[2]

Preemies will be cared for in a hospital Neonatal Intensive Care Unit and many will need to receive oxygen.  Extremely premature babies may also require surfactant, which is a chemical that inflates the alveoli in the lungs where oxygen and carbon dioxide are exchanged.  They may also need respirators, because extreme preemies have low muscle tone and breathing muscles are underdeveloped.  The closer the baby is to full-term delivery, the less likely is the need for oxygen and additional breathing assistance.

In addition, very preterm babies may require IV or tube feeding, because the sucking and swallowing reflexes are underdeveloped.  Again, the closer the child is to full-term age, the more likely she can swallow on her own, and be breastfed or bottle-fed.  But if a baby needs a respirator, she will be fed with a nasogastric tube.[3]

Complications of premature birth are related to age. Jaundice from immature liver functioning, respiratory problems ranging from apnea to respiratory distress syndrome, circulatory problems like low blood pressure, anaemia in the red blood cells, and the failure of the blood vessel called the ductus arteriosus to close, are a few of the short-term acute complications related to immaturity. Fragile systems can also place the baby at risk for gastrointestinal infections, bleeding inside the brain (more common in extremely premature babies) and hydrocephalus or fluid on the brain.[4]

Premature babies can also have long-term complications, like cerebral palsy (caused by poor circulation, insufficient oxygen, or other systemic issues), retinal problems that can cloud vision or cause blindness, hearing loss, behavioural or psychological problems, learning disabilities, and chronic conditions like asthma.[5] However, many preemies do not have complications, especially with today’s advanced medical interventions. Neonatologists are paediatricians who specialise in the care of preterm babies, and they can assess specific risks before birth, and can monitor and intervene to improve the outcome of the premature baby. [6]

Amelia, who was delivered just under 22 weeks (21 weeks, 6 days) from conception, was born on the 24 October 2006 with respiratory and digestive problems, but her doctors say none of the health concerns are expected to pose long-term problems. She went home in February 2007.

"Her prognosis is excellent," said Dr. Paul Fassbach, who has cared for Amelia since her second day. It was reported that the child even underwent plastic surgery during her two months in an incubator to repair damage to her ear. 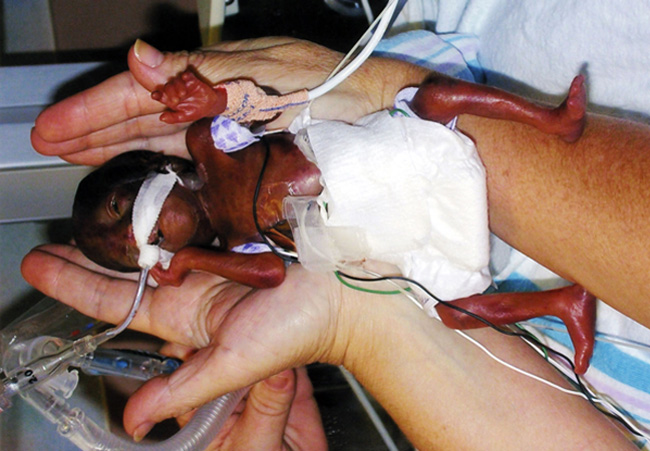 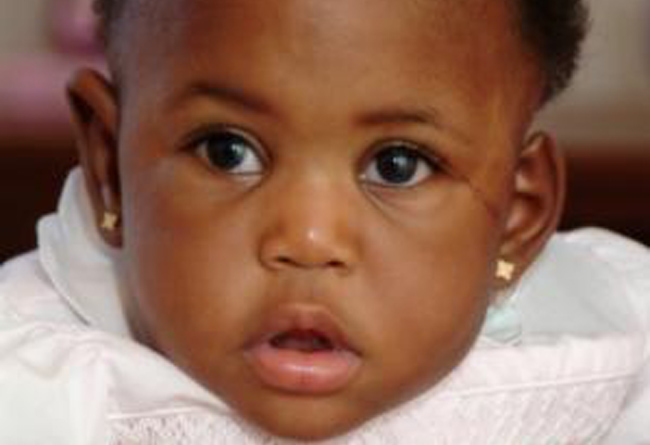 Jacob McMahon, born  at 23 weeks gestation on 22 February 2011 and weighing just 1lb 4oz, left the hospital in July of the same year in good health, making him Britain's most premature surviving baby at that time. Jacob had a twin sister, Emie, who was born eight days before him but died from infection.

A premature baby born at Derriford Hospital in Plymouth weighing just 1lb defied the odds to reach her first birthday - despite being so small she was kept alive in a sandwich bag. Miracle tot Lucia Sansbury weighed less than half a bag of sugar when she was born more than three months early. The tiny infant needed emergency treatment to repair her bowel and laser surgery to save her eye sight. 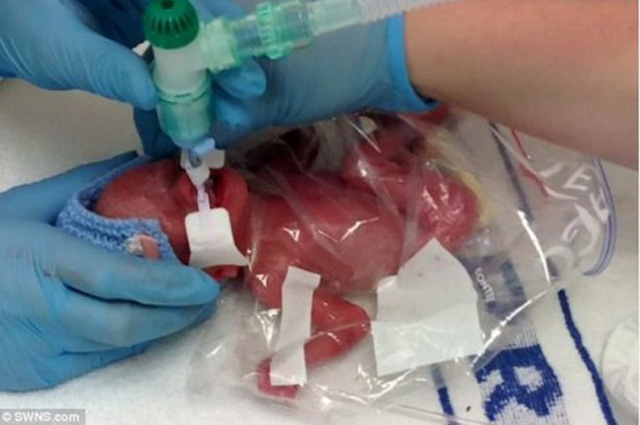 Little Frieda was born on November 7, 2010, at Fulda Children's Hospital in Germany. She weighed just 1lb and measured 11 inches. A record-breaking baby girl, she was born at just 21 weeks and five days but spent Easter at home with her delighted parents after spending five months in neonatal care. 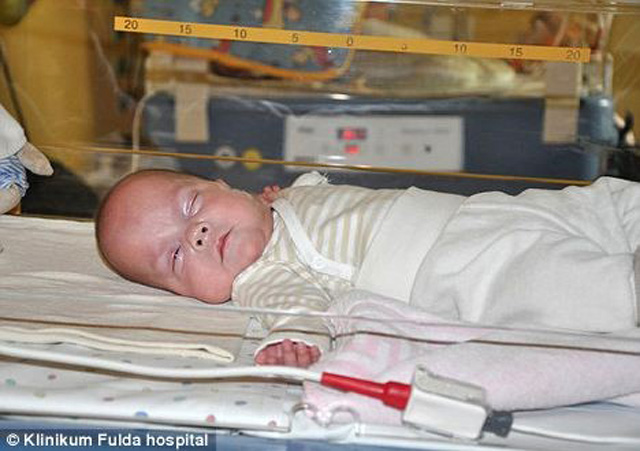 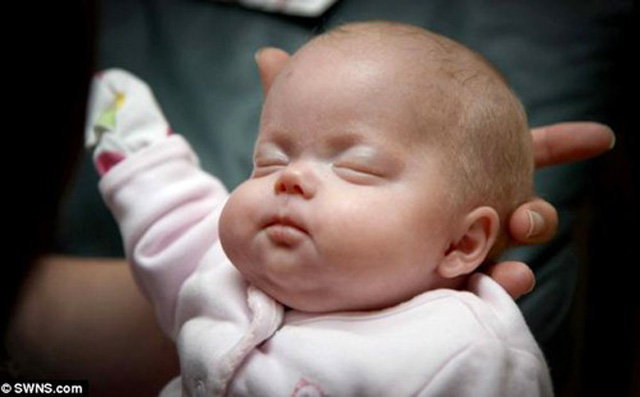 [1] “What Happens if My Baby is Born Prematurely?,”  University of Maryland Medical Center.  Accessed online on 8/9/14 at http://umm.edu/health/medical/pregnancy/labor-and-delivery/what-happens-if-my-baby-is-born-prematurely