From the first days of development, stem cells are present. These cells will differentiate into all of the 200 plus cell types contained in the human body! The specialized cells in our brain, heart, liver, and the rest of our body all originate from stem cells in the embryo. 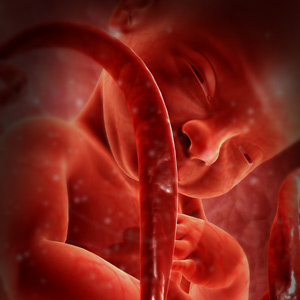 In every cell in the human body there is a nucleus, where genetic material is stored in genes. Genes carry the codes responsible for all of our inherited traits and are grouped along rod-like structures called chromosomes. Typically, the nucleus of each cell contains 23 pairs of chromosomes, half of which are inherited from each parent.

In regular cell division in our bodies (known as mitosis), the DNA-containing chromosomes in the nucleus reproduce so that each cell (such as your skin cell, hair cell, heart cell) has 46 chromosomes.  It is a miracle of life that parent cells (known as haploid gametes) contain only 23 chromosomes, so the baby will receive half her DNA from her mum, half from her dad.  This process is called meiosis.  This simple video provides an overview of the difference between mitosis and meiosis.

Here are some more details about the phases of meosis, and how the single 46-chromosome cell divides into 4 haploid parent cells.

During reproduction, one of the haploid gametes in the sperm and another in the egg will join, to provide the DNA in the blastocyst and then the developing embryo.

So each embryo gets half of its genes from each parent. In each pair of genes (or alleles) one will take precedence (dominant) over the other (recessive) in determining each trait, or characteristic.

The principles of dominant and recessive heredity in humans are quite simple; in fact they were discovered by an Austrian monk named Gregor Mendel who was studying peas!  This video shows how recessive alleles can be hidden by dominant alleles but still present in the genetic material or genotype.  Yet in a third generation, if a person (or a pea) inherits two recessive alleles, the original trait will surface in the phenotype (characteristics):

Sometimes birth defects can be caused by dominant gene inheritance.  If one parent carries the dominant trait for a disease, the baby will inherit the condition.  Examples of dominant disorders include dwarfism, polydactyly (extra fingers and toes), a connective tissue disease known as Marfan syndrome, and a progressive nervous system disease called Huntington’s disease.

Play this video to see the beautiful, loving, round the clock care a Jewish family provides to their eight-year old daughter with Tay-Sachs disease:

Sometimes you can prevent disease!

Birth defects are found in 2-3% of all newborns.  By age 1, the rate is 4-6%, by age five it reaches 10% as more defects are able to be diagnosed. This short video presents an overview of ‘teratogens’ (substances or diseases that can harm a baby during pregnancy):

Physicians and midwives are trained to counsel mothers about avoiding teratogens, especially during the first three months of pregnancy.

“Multifactorial diseases” are birth defects caused by a combination of genetic mutations and teratogens.

This means that parents who carry the tendency to certain genetic diseases can improve their chances of keeping baby healthy by avoiding teratogens.

Three examples of multifactorial disease caused by deficiency of the B vitamin folic acid include;

Amazingly, some anencephalic babies do survive beyond the odds.  In this touching story, Baby Nicholas, expected to die at birth, has hung on to life till his second birthday.

Other multifactorial diseases include cleft palate, which requires surgery to seal the lip and palate so the child can eat and speak properly.  While genetics are definitely at play, other factors such as smoking and antiseizure medications can increase its risk.[2]

Cleft palate affects the health but also the appearance and social life of children born in less developed countries.  This slide show from an NGO in Ethiopia shows how children’s disfigured faces can be made whole by a simple surgery:

A team of Irish and American researchers has discovered that half of the population is at an increased risk of severe birth defects, such as spina bifida, due to a variation in a gene known as C677T.[3]  Seven Irish babies per month have spina bifida or other neural tube defects.  Sadly half these babies will die shortly after birth.  Fortunately, the risks from having the C677T gene can be greatly reduced if the mother takes folic acid before and during early pregnancy.  Presently only 25% of Irish mothers take folic acid before becoming pregnant.

The US Center for Disease Control (CDC) provides an upbeat and realistic look at life for spina bifida children: